Blog / What’s next for aptamers in diagnostics?

What’s next for aptamers in diagnostics?

Originally developed in the early 1990s, aptamers have long been heralded as an antibody alternative for detection applications. Fast forward to 2022 and their use in diagnostics (as well as therapeutics) is starting to take off. Here are a few of the recent applications and technological advances that the team at LGC Biosearch Technologies are excited about and believe will drive the future of aptamers in diagnostics.

Molecular aptamer beacons as “and” operators to reduce background during detection

Background signal is always a challenge for developing robust detection assays, regardless of the detection method. This is especially true when you are trying to detect or quantify exosomes, as most methods rely on binding – typically by antibodies – to specific proteins found on the surface of the exosome. The problem arises from the free protein that often accompanies isolated exosomes, which bind to the detection molecule resulting in overestimation and/or variability in exosome quantitation.

Thus, a strong signal only occurred in the presence of both HER2 and the exosome membrane, reducing background signal from free HER2 protein.

Aptamers for microfluidic catch and release

Exosomes are also part of another aptamer story we’re excited about, as exosomes are gaining in importance for diagnostic and therapeutic applications.2–6

One of the big advantages of aptamers over antibodies is the ability to release the bound target under relatively mild conditions, such as high salt. When the binding target is an exosome, the high salt conditions leave the exosome intact and functional for downstream assays, such as therapeutic use.

While immunoassays like ELISAs can be useful for sensitive detection and quantification of protein targets in the blood, these assays can be time and labour intensive, with multiple incubation and wash steps. Yu, et al.8 developed an aptamer plus molecular beacon assay that could detect a target – platelet-derived growth factor (PDGF) – at a limit of detection (LOD) of 0.74 ng/mL, without the requirement of multiple wash steps. 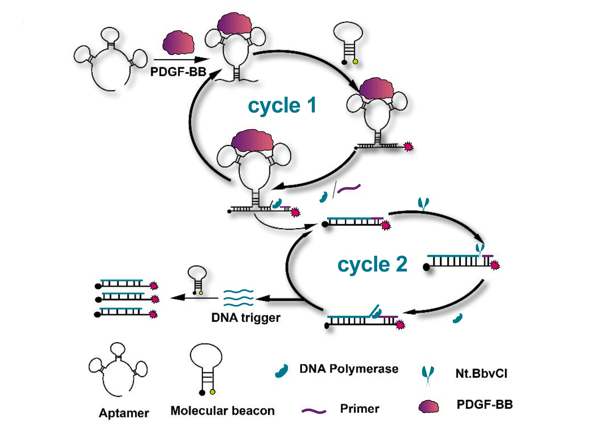 Figure 1, adapted from Yu, et al.,8 illustrates how binding of the target PDGF-BB to the aptamer causes a conformational shift that exposes and brings into close proximity sequences complementary to the molecular beacon. Addition of a primer and nicking endonuclease (NtBbvCI) enables multiple rounds of replication to increase the aptamer’s molecular beacon binding sequence, further amplifying the signal from the molecular beacon. The colours in this figure have been adapted from the original (CC-BY-4.0).

Aptamers for high-throughput screening and discovery

Another example of where aptamers have an advantage over antibody assays is with large-scale exploration of the plasma proteome. Using genome-wide association studies (GWASs), sequence variants in the genome can be associated with levels of protein in plasma – referred to as protein quantitative trait loci, or pQTL. These pQTLs help to better understand the mechanisms behind disease pathways.

Antibody-based methods can be used to measure circulating proteins. However, recent advances in aptamer-based methods have enabled vast numbers of proteins to be measured, providing greater coverage of biological pathways.

Ferkingstad, et al.9 took pQTL studies to new levels by using the SomaScan multiplex aptamer assay to measure 4,907 plasma proteins in 35,559 Icelanders and analyse against the associations of 27.2 million sequence variants and 373 diseases and other traits. Through this study – far larger than others before it – they identified 938 genes encoding potential drug targets, ultimately providing a valuable resource to support drug discovery.

While powerful, it’s taken decades for researchers to start fully realising the tremendous potential of aptamers for diagnostics. We’ve needed advances in related technologies such as molecular beacons, black hole quenchers, and microfluidics. We’ve also needed creative approaches to take full advantage of the 3D conformation combined with duplex DNA binding, such as in the work of Yu, et al.8 Building on such a strong foundation of innovation, especially in the past few years, we expect to see a great deal more exciting work in the years ahead.

Get started on your own aptamer innovations with Biosearch Technologies’ oligonucleotide synthesis services.