Fluorophores are molecules that can absorb light energy in a process called excitation and re-emit light energy at a longer wavelength in a process called emission. As the absorbed and emitted light are detectable as different colours on the visible spectrum, this makes fluorophores ideal for use in a variety of assays to help determine the concentration of target analyte in a sample.

In qPCR, fluorescent modified oligos may be either linear or non-linear in structure. In either conformation, Förster resonance energy transfer (FRET) combined with the static quenching mechanism inhibits reporter dye emission until hybridisation with the target (read Quenching Mechanisms in Probes to learn more about FRET and static quenching). Upon hybridisation the quencher and reporter dye are separated spatially, interrupting the quenching mechanisms and permitting fluorescence emission from the reporter dye. The increase in signal intensity with repeated PCR cycles indicates the accumulation of product and allows for accurate quantification of template. Gene expression analysis by qPCR is dependent upon direct comparisons between the normalised fluorescence emission of individual samples against a standard curve or through ‘relative’ comparison against expression of an internal calibrator gene.

How do I know how bright the dye will be? 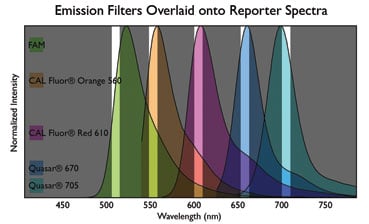 Assay performance is different from dye performance. When considering the variables affecting assay performance and its diagnosis when things go amiss, the failure may not necessarily relate to the dye or even the probe but rather other elements in the ensemble, such as primers, enzymes or inhibitors that were unanticipated. If you are looking for ways to troubleshoot unexpected results from your qPCR assays, you may like to read this article: 8 qPCR amplification plot questions answered.

Finally, have a look at another one of our articles that offers guidance with interpreting your qPCR amplification curves and diagnosing assay problems.