SARS-CoV-2 mutations and associated new variants are being reported regularly in the media and scientific literature. The rapid increase in the rate of infection in India was partly attributed to the emergence of three related variants: Kappa (B1.617.1), Delta (B1.617.2) and B1.617.3. In September 2021, the Delta variant is dominant in much of the world.1 Most of the reported mutations affect the Spike-gene, but there are also reported mutations along the SARS-CoV-2 gRNA. As previously reported (Technical Bulletin 1), LGC, Biosearch Technologies has a four-tier assay screening and replacement programme to identify and mitigate against the risk of assay impairment in the event of a mutation arising within the target binding site of diagnostic assays.

Mutation location: Of the sequences with the defined prevalence in GISAID, mutations lying within the five bases at the 3′ of a primer or the central 50% of a probe are taken forward for wet lab testing. Single base mismatches lying outside of this region are reported to have low impact on assay performance.2

Tm change estimate: The Tm of the assay oligo with the matched target sequence is compared to that of the mismatched target using in silico assessment.

The N1, N2, SC2 and mitigation assay sequences were screened against sequences submitted to GISAID (up until September 2021). No mutations of concern were identified in the potential mitigation assays or in SC2. Eight mutations in N1 and N2 assay oligo target sites were highlighted for further investigation and for wet lab analysis.

With the exception of T29194C, the predicted Tm differences were suggestive of a potentially detrimental effect of the mutation on the assay (Table 2). Each of the mutations was then taken into a wet lab testing protocol.

Mutations are relative to the SARS-CoV-2 reference sequence NC_045512.2 and the naming convention is described in “Emerging SARS-CoV-2 mutations and their effect on the immune response” technical bulletin.3

In the absence of viral templates for these mutations, a template DNA amplicon containing the mutation was synthesised, along with wild-type templates. The concentration of each synthetic template was normalised to that of the AccuPlex™ SARS-CoV-2 Reference Material. All targets were detected using the ultra-high-throughput SARS-CoV-2 N1/N2/RnP assay, RapiDxFire™ qPCR 5X Master Mix GF, including EpiScript™ Reverse Transcriptase.

The ultra-high-throughput SARS-CoV-2 N1/N2/RnP assay contains assay oligonucleotides to detect SARS-CoV-2 N1 and N2 targets (Table 1) and the human RNase P. The N1 and N2 specific probes are both labelled with FAM and the Human RNase P detection is from a CalFluor™ Orange 560 (CFO560) labelled probe.

This high-throughput workflow supports the analysis of 150,000 samples per day. Reactions were prepared in the Nexar liquid handling system and dispensed into wells of the Array Tape™ consumable. The total reaction volume was 5 µL, of which 3.8 µL was the sample and the remainder RT-PCR Master Mix. Samples were included at 500, 50 and 5 copies per reaction and 10 replicates run for each concentration. Fifty PCR cycles were run in the Hydrocycler2 and then the fluorescence was read using the Araya plate reader.

For each of the eight mutations analysed, the mutated and wild-type templates could not be differentiated when 500, 50 or 5 copies were included in the reaction and end-point fluorescence was detected. Based on this data, these mutations have not been highlighted as a risk to the continued use of the ultra-high-throughput SARS-CoV-2 N1/N2/RnP assay (ePCR) (Table 3).

Real-time analysis was carried out using a Bio-Rad CFX. This is a relatively low-throughput system using larger volume samples in a 96-well format. For this study, 20 µL reaction volumes contained 500 copies of the template carrying the specific mutation of interest or the wild-type construct.

The impact of primer and probe mutations will depend on the nature of the nucleotide mismatch and position within the oligonucleotide. Previous studies of melting curve analysis using HyBeacon probes indicated that destabilising mismatches (C/A, C/T and C/C) will yield ΔTms of 8-10 °C, intermediate mismatches (A/A, A/C, T/T, and T/C) will yield ΔTms of 6-8 °C and stable mismatches (A/G, T/G, G/A, G/T and G/G) will result in ΔTms of 4-6 °C. The impact of a mutation depends also on context and location. In addition, the impact on the overall assay depends also on which oligonucleotide is affected. Mutations in the primer serving as the reverse transcription primer impact the initial generation of cDNA, thus reducing template in the reaction. Mutations in either primer target sequence may result in inefficient priming and initially delay PCR. However, each amplicon then contains the primer sequence facilitating subsequent efficient PCR. Mutations within the probe result in inefficient binding and cleavage of the probe at each cycle, thus, increasing Cq indirectly when the ΔRFU is reduced. It is predicted that mutations located towards oligonucleotide ends will reduce probe stability to a lesser extent. However, mismatches located towards the 3´ ends of primers will have a greater impact on assay efficiency.

The impact of mutations was measured by comparison of amplification of each mutation-containing construct to the amplification of the wild-type target (N1 WT SPUD, N2_WT_SPUD) and the AccuPlex SARS-CoV-2 package virus control material using measures of both Cq (Figure 1) and end-point relative fluorescence (Figure 2). Statistical analysis of these data was used to identify mutations that resulted in deviations from the wild-type.

Under these conditions, the four N1 mutations resulted in up to one cycle delay when compared to the wild-type construct. Two of the N2 mutations G29179T, T29194C also resulted in less than one cycle delay. There was a slightly higher delay of around two cycles in the presence of the C29197T and C29200T (Figure 1). 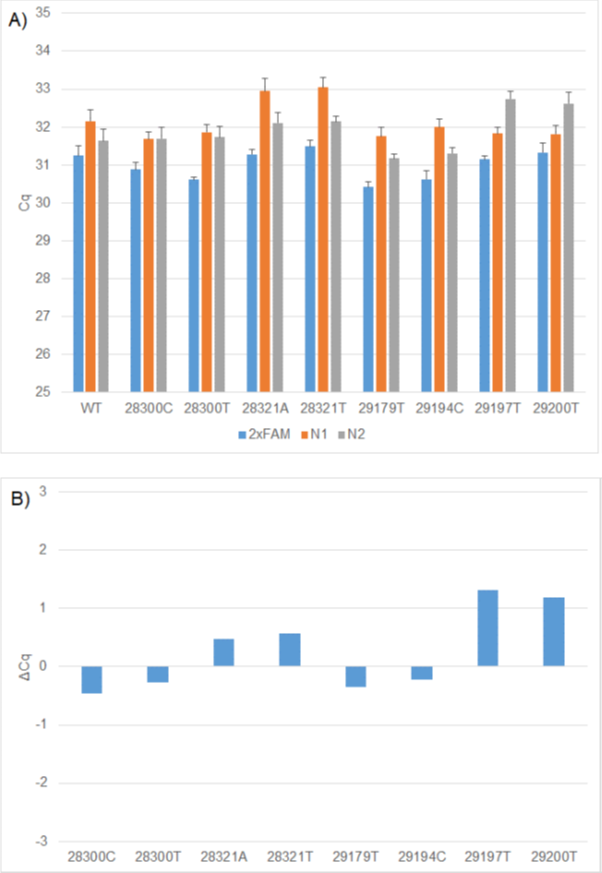 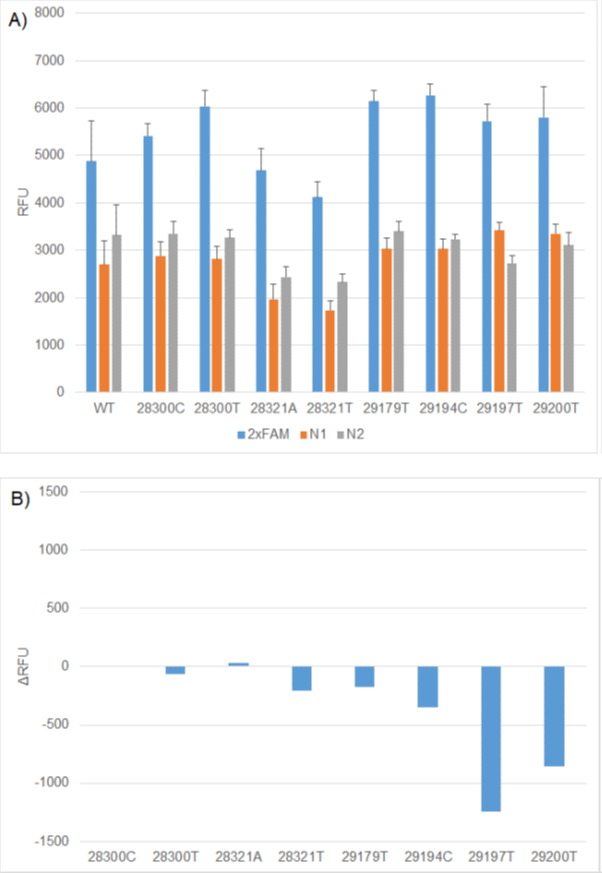 Table 3 Analysis of mismatches due to mutations

There was no absolute relationship between the predicted change in Tm or percentage mismatch and the result of functional testing. As predicted, the mismatches with C in the probe had more impact than other probe mutations or primer mutations. However, the two N2 mutations within the probe resulted in the second and third highest Tm differences. One of these is C29200T. Ziegler et al, (2020) reported that this mutation had little impact on assay performance under their conditions, as observed in this study.4 This data illustrates that the wet lab analysis is critical for understanding the impact of emerging mutations on diagnostic assay performance.

Biosearch Technologies has adopted an aggressive screening approach of our diagnostic assays to ensure the highest vigilance. Regular in silico analysis of mutations of concern ensures the rapid identification of any potential lack of function of our assays. Subsequent wet lab testing facilitates an understanding of how any mutation would impact the assay in the diagnostic setting. The mitigation assay programme is in place to swiftly deploy a new assay should we discover that the sequences of the assay are compromised.