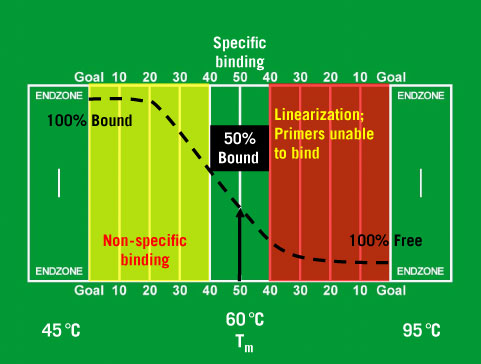 In PCR, the temperature at which primers anneal during a cycle determines the specificity of annealing. The melting point (Tm) of the coolest primer sets the upper limit on annealing temperature. At temperatures just below the Tm, only very specific base pairing between the primer and the template will occur. As the temperature decreases, primer binding becomes less specific. Non-specific primer binding results in the amplification of undesired products and may mask the actual copy number of the gene of interest.

Touchdown PCR (Step-down PCR) is a variant of qPCR that reduces nonspecific target amplifications by gradually lowering the annealing temperature as PCR cycling progresses. The annealing temperature at the initial cycles is usually a few degrees (3-5 °C) above the Tm of the primers used. This ensures high specificity binding of the primers and is least-permissive of non-specific binding. As the PCR continues, each cycle occurs at lower and lower temperatures, decreasing by 0.2 °C per cycle. At the later cycles, it is a few degrees (3-5 °C) below the primer Tm. The higher temperatures give greater specificity for primer binding, and the lower temperatures permit more efficient amplification from the specific products formed during the initial cycles. Thus, the first sequence amplified is the one between the regions of greatest primer specificity and will be the most abundant product after cycling is complete.

This method is effective for amplification of one or only a few gene transcripts at a time. For larger comparative studies, standard PCR thermocycling conditions are recommended.