Quantitative real-time PCR (qPCR) is based upon the fractional cycle number at which a replicating sample of target DNA accumulates sufficient fluorescence to cross an arbitrary threshold. The threshold is either manually selected or auto-selected to fall several standard deviations above baseline fluorescence and below the plateau phase, where the amplification begins to attenuate. Typically, the threshold is adjusted to the mid-point of the exponential phase of the PCR, at a location suitable for all samples in the experiment. The CT (cycles to threshold) value for a given reaction is defined as the cycle number at which the fluorescence emission intersects the fixed threshold.

What if your assay is non-exponential?

The first step in qualifying newly-developed primers and probes is to test the assay on carefully quantified controls. Irregularities in the amplification of these controls indicate that some modification to the assay must precede its use upon valuable samples.  The diagrams and statements below represent a few of the more commonly occurring issues and how they may be addressed by considering the information presented. This information is intended to be a starting point for trouble-shooting efforts and is not comprehensive. With regards to protocols, it is always best to follow the recommendations of the manufacturer of the polymerase enzyme. When multiplexing, use a master mix specifically designed for multiplex reactions. 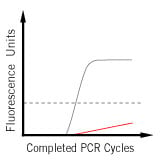 Observation: Exponential amplification in the no template control (NTC)

Potential Causes: Contamination; carried over from reagent manufacture or possibly laboratory exposure to the same target sequence, as in gel electrophoresis 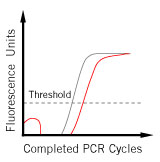 Observation: Looping of data points during early cycles; high noise at the beginning of recorded data

Potential Causes: Baseline adjustment includes too many cycles; too much starting material

Corrective Steps: Reset Baseline to 3 cycles before the first indication of amplification 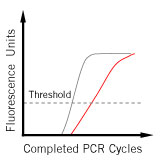 Corrective Steps: Re-design primers to a different region of the target sequence; keep melting temperatures within 2 °C of each other; keep the GC content to between 30%-50%; test assay performance against carefully quantified controls 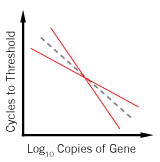 Observation: Slope of standard curve is more or less than –3.34 and R2 value is less than 0.98

Corrective Steps: Recalculate the standard concentration or gene copy number using a spectrophotometer or other means; make new stock solutions of the control standards; eliminate extreme concentrations and limit range to 5 logarithms; consider using a carrier such as a yeast tRNA in the buffer used to generate the dilution series 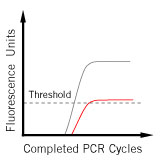 Observation: Plateau is much lower than expected

Potential Causes: Limiting reagents; degraded reagents such as the dNTPs or master mix 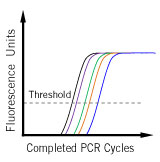 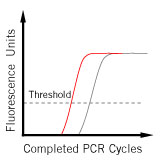 Observation: Actual CT is much earlier than anticipated 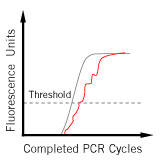 Corrective Steps: Contact equipment technician; warm master mix to room temperature and mix thoroughly before use; allow primers and probes to equilibrate for several minutes at room temperature before use; mix primer/probe/master solution thoroughly during reaction set up; if the amount of probe is low or the signal too weak, the program will magnify the baseline noise; redesign the probe and primer sequences 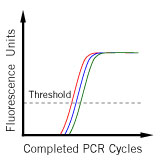 Observation: Technical replicates are not overlapping and have a difference in CT values > 0.5 cycles

Corrective Steps: Calibrate pipettes; use positive-displacement pipettes and filtered tips; mix all solutions thoroughly during preparation and during use; hold pipette vertically when aspirating solutions-sterile technique does not ensure reproducibility when working with small volumes 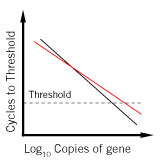 Potential Causes: Efficiency of amplification is below 88% in one or both samples; differences in efficiency are > 5%; RNA degradation; inaccurate dilutions

Corrective Steps: Re-design primers for one or both genes; repeat experiment with fresh reagents and sample 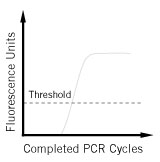 Observation: No data in selected wells 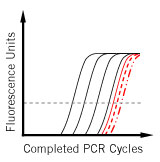 Potential Causes: Limited linear range of detection due to low expression of target transcript; carry-over contamination is obscuring the assay’s limit of sensitivity 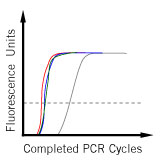 Potential Causes: Degradation of the probe