Molecular Beacons - Lights in the storm 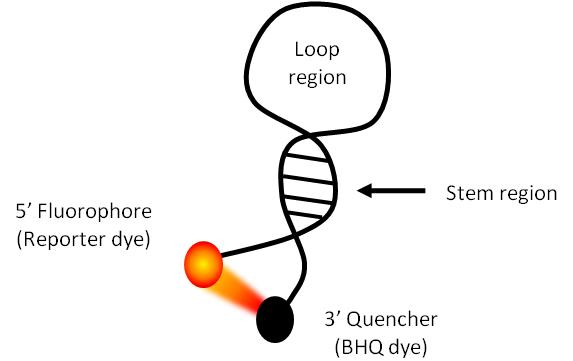 Molecular Beacons are a special type of dual-labeled oligonucleotide probe. Beacons are hairpin loop structures with a 5'-fluorophore and a 3'-quencher dye. The stem region is a short sequence of 5-7 complementary bases. The loop sequence is complementary to the target sequence. In the absence of target or prior to amplification, the stem anneals to form a closed hairpin conformation which holds the reporter and quencher close together to enable efficient FRET quenching and to promote contact or static quenching. The beacon is engineered such that the probe-target hybrid is more stable than the closed hairpin conformation, which is respectively more stable than a probe-mismatch hybrid. Therefore it is only in the event of a perfect-match hybridization that signal occurs, allowing beacons to discriminate mismatches as small as a single nucleotide polymorphism (SNP).

END_OF_DOCUMENT_TOKEN_TO_BE_REPLACED

A BHQ® probe is a dual-labeled oligonucleotide covalently labeled with a fluorophore and a Black Hole Quencher® (BHQ) dye.

Q. What are the main components of a dual-labeled Black Hole Quencher® (BHQ) probe?

END_OF_DOCUMENT_TOKEN_TO_BE_REPLACED 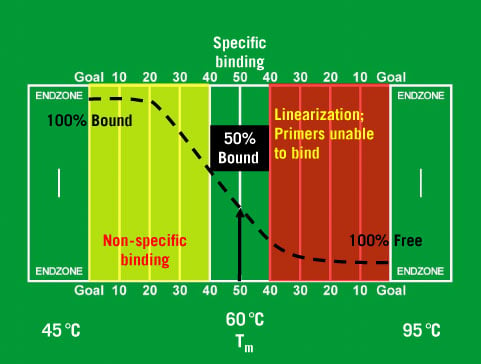 END_OF_DOCUMENT_TOKEN_TO_BE_REPLACED

An Alternative to DNAse I heat inactivation: LiCl precipitation

Genomic DNA contamination has been a hot topic for qPCR researchers since the beginning. It is impossible to remove all DNA from RNA preparations without additional steps. The most commonly used technique is to incubate with DNAse I. The deoxyribonuclease I (DNAse I) enzyme catalyzes the hydrolytic cleavage of phosphodiester linkages adjacent to a pyrimidine nucleotide. It acts on single-stranded DNA, double-stranded DNA, and chromatin. DNAse I activity will degrade trace amounts of genomic DNA (up to 10 µg/mL) that could otherwise result in falsely positive signals in subsequent RT-PCR reactions. DNAse I is a heat-inactivated nuclease, requiring both the presence of EDTA and temperatures of 75oC for 5 minutes for complete inactivation. The extreme temperatures associated with heat-inactivation of the enzyme may cause damage to the RNA through chemical mediated degradation if even small amounts of metal ions are present. Lower temperatures will not fully inactivate the DNAse before reverse transcription of the RNA to cDNA. Because we cannot discriminate between cDNA and DNA amplification products, initial copy number determination is compromised.

END_OF_DOCUMENT_TOKEN_TO_BE_REPLACED Competitive qRT-PCR has become a lost art. Early titans of probe-based PCR used this technique to minimize variability between samples and experiments due to differences in reverse transcription and amplification efficiency. This technique facilitates the absolute measurement of initial gene target copy number based on known copy numbers of a control template.

This is accomplished through the addition of an internal control, a competitor sequence to the mRNA target in the sample. The competitor sequence is similar enough to use the same primer pairs as the target sequence but has a unique central sequence allowing for analysis with a different probe and reporter. Plasmid DNA or in-vitro transcribed RNA is commonly used as a competitor sequence and standard for quantification. To detect the initial copy number of a gene of interest, multiple replicates of a fixed amount of the target mRNA are dispensed into tubes. In the same tubes, 10 fold serial dilutions of competitor RNA are "spiked" in sequentially. Using one set of primers and two fluorogenic probes labeled with different dyes, real-time PCR data can be collected for both sequences simultaneously.

END_OF_DOCUMENT_TOKEN_TO_BE_REPLACED

Ribosomes are comprised of two subunits, one small (40S) and one large (60S). The 36B4 gene encodes an acidic ribosomal phosphoprotein P0 (RPLP0), which forms tight associations with the smaller 40S protein (L12). 36B4 protein is part of a pentameric complex that forms a stem-like structure, protruding into the cytoplasm, off of the 60S subunit. This protrusion functions to support the GTPase steps in the translocation of protein synthesis. Why is 36B4 fast becoming the new reference gene for probe-based real time RT-PCR?
END_OF_DOCUMENT_TOKEN_TO_BE_REPLACED